Touring Then and Now

As a touring musician, the last two years or so have been a struggle. The coronavirus pandemic as well as Brexit and the growing tour costs have put a strain on all of us. The Paul McKenna Band first came to Germany around 2009. From that moment, we knew it was always going to be a very important place for us and somewhere we wanted to grow an audience that we could return to year in year out. Despite the recent pandemic, we have played in Germany almost every year since and it has always been one of our favourite countries to tour. So what has changed, you might ask?

Brexit. That nasty word that has been ringing around everyone’s head since 2016. Under the new rules, we now must keep a note of our movement around the EU. We cannot exceed 90 days in a 180 day period, which has its limitations. So far, we have managed to avoid the need for any visas, but if we ever have to exceed that 90 day period then that will mean a lot of paperwork … – which I am not looking forward to! Out with the time restrictions on being within the EU, some of the other fears we had surrounding new regulations around Brexit have not come to fruition. However, this has still left a sense of doubt with many promoters in EU countries when booking acts from the UK. Hopefully we will see an independent Scotland before too long and we will be back in the EU. Fingers crossed.

“Brexit has had a negative effect on all travel around Europe, but I think the coronavirus pandemic has impacted us more.”

Brexit has had a negative effect on all travel around Europe, but I think the coronavirus pandemic has impacted us more. The cost of flights, car hire and fuel has increased dramatically since we have been allowed to travel again. I can compare the cost of a tour in 2019 to our most recent German tour in May 2022 and the flights and van rental alone were almost double. Not only the travel costs but the audience numbers have taken a hit too. In May this year we returned to some of the same venues that we had visited in 2018/2019 and in some cases the audience numbers were less than half. We had less than 30 people in the audience in one venue, and this is something we have never experienced in Germany before.

We can only hope that the reasons for low audience numbers in some cases are due to people’s own fears around the coronavirus and that these fears will be subdued with time. We are also acutely aware of the cost of living crisis, which I assume is affecting people around the world as it is here, this may be limiting peoples’ disposable income. What we cannot hope for is a return to the high merchandise sales that we experienced in the early days of touring your fine country.

It was always a guarantee that when touring Europe we could sell a large number of CDs at each show. This often exceeded the show fee and allowed us to add more products to our merchandise, like t-shirts etc. Over recent years, CD sales have dropped drastically. And now an average t-shirt costs around £9 (€10) to make and we can realistically sell them for around £15 (€17). We have discussed what other ways we could counter the falling CD sales, but most are untested and may be risky.

Vinyl has been very popular over recent years and I myself have been known to purchase new Vinyl from some of my favourite artists. This would seem like an obvious route to go down, but the costs involved are high. I would need to re-evaluate this once touring is completely back to normal again and gauge whether or not people are still buying vinyl.

As for other merchandise options to sell post-show, we have tried stickers and lighters which sell well and might become a more regular feature. Perhaps if CD sales are going to continue to fall, some kind of QR code would be the way forward. If we could set it up, so that the money could come directly to the band, then I think it is something that we have to try.

I’m staying as positive as I can moving forward. I believe that we will get the audiences back again and we are planning a tour around Germany and Denmark for November 2023. Maybe we can try out the QR code then or test the waters with some vinyl?

Paul McKenna is a singer/songwriter from Glasgow in Scotland. The Paul McKenna Band formed in 2006 and was named “Best Newcomer” at the Scots Trad Music Awards in 2009. They have released five albums to date, the most recent being Breathe from 2019. 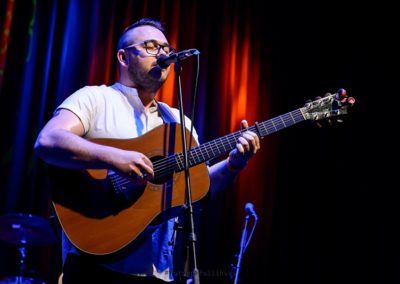